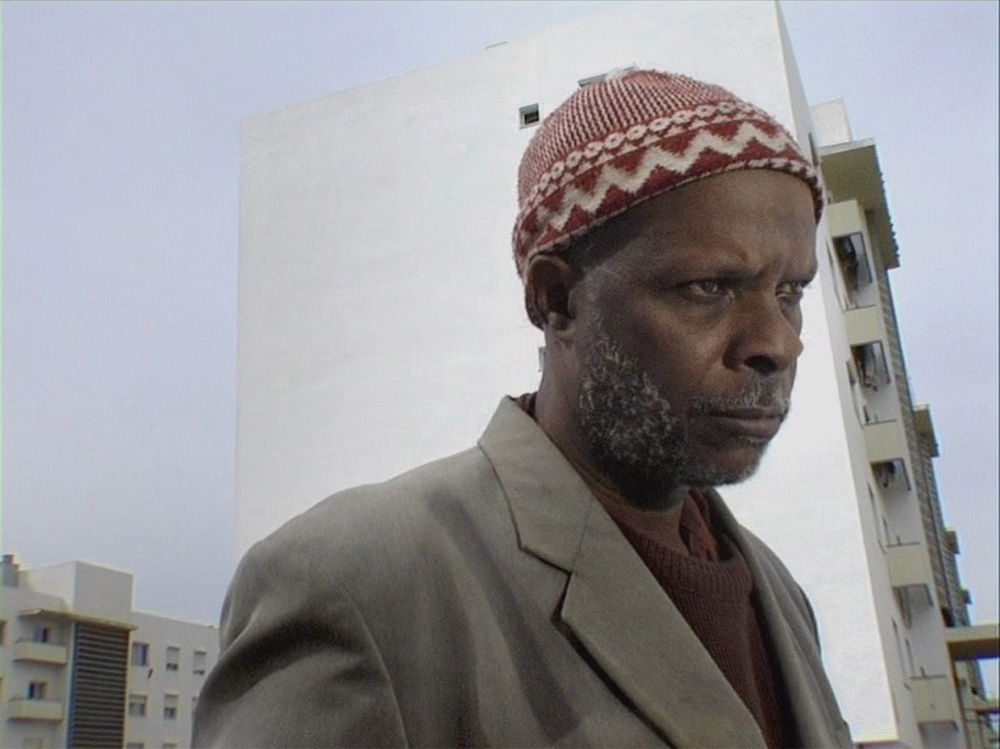 For the last letter of its primer, MOVING_IMAGE proposes to discover 6 singular works that question the possibility of seeing and hearing. The "disparate singularities" mentioned by Gilles Deleuze at the end of his primer suddenly make sense, to assert a view and a position in the world. With the exceptional screening of Pedro Costa's "Our Man" (O nosso Homem), as well as films by Rafiqul Shuvo, Christian Barani, Dominik Ritszel and Barani, Dominik Ritszel, Halida Boughriet and Louise Botkay. Translated with www.DeepL.com/Translator (free version)

In the presence of Christian Barani and Halida Boughriet.

Rafiqul Shuvo questions the relationship between the body and nature, the fact of being there and soon not being there anymore. The contrast between the image and the soundtrack designate the gap between timelessness and the time of a life, the black and white image calls for colour.

Rafiqul Shuvo lives and works in Dhaka, Bangladesh, where he studied sculpture at the University of the Arts. As a video artist, photographer and sculptor, his work His work has been shown in numerous exhibitions in Bangladesh and internationally. He curated "Only God Can Judge Me" in 2012, one of the major one of the major contemporary art exhibitions in Bangladesh. He recently directed his first feature film.

In a mine, in Kuzembayev, in the steppes of Karaganda in Kazakhstan, at that moment before the descent into darkness, Christian Barani Christian Barani films the miners, their movements and their looks.

Christian Barani lives and works in Paris. His work questions and deconstructs the codes of documentary through an experience involving a body/camera in space. body/camera in space. He makes linear films, installations and performances. His work has been screened and exhibited in numerous festivals, museums and art centres in Europe, including the Centre Pompidou, the Jeu de Paume, the Lieu Unique in Nantes, the MUSAC Museo de Arte Contemporaneo de Castilla y Leon, the Reina Sofia National Museum.

"Preludium" explores the relationship between a son and his father, an imperceptible and childlike game. Dominik Ritszel has filmed in the family home, and is with his own father and brother. The film is the recollection of a request to his father, who refused to teach him the piano, saying that it was too late.

Dominik Ritszel lives and works in Katowice, where he studied at the Academy of Fine Arts. He makes installations, videos and performances. "Preludium" is his first short fiction film. Since 2012 he has been a member of the Curators Network. His work has been exhibited at Palazzo Ca' Zanardi in Venice.

"Pandora" shows a social group, children on the margins of French society. They take a dark and disturbing look at the reality of human relationships and the violence of the media system. Invited to reveal themselves, to testify about their stories, which reflect the image of a past and a present, between myth and reality.

Halida Boughriet lives and works in Paris. She is a graduate of the Ecole des Beaux-Arts in Paris and of the SVA exchange programme in the cinema section in New York. York. At the crossroads of aesthetic, social and political questioning, her pieces are interested in the tensions in human relations brought to light by by society. His works are part of the "New Media" collection of the Centre Pompidou and the MAC/VAL museum in Vitry-sur-Seine. His work has been has been presented in numerous exhibitions, notably at the Centre Pompidou, the FIAC in Algiers, the Institut du Monde Arabe, and the 2014 Dak'Art International Biennale.

Vertières is the name of a district of the city of Cap-Haitien where, in 1803, the great battle took place that allowed the Napoleonic army to be expelled from the island. Haiti became the Haiti became the first country in the world to gain independence from the colonial powers.

Louise Botkay lives in Rio de Janeiro and works between Brazil and France. She graduated from the Fémis in Paris and the Faculty of Design in Rio. Her films have been selected Her films have been selected and awarded in numerous festivals such as the Festival Premier Plan d`Anger, the Festival de Brive, the São Paulo International Film Festival. His work has also been exhibited at the Yerba Buena Center for the Arts in São Francisco and at the Museum of Modern Art in Rio de Janeiro.

With "O Nosso Homem" (Our Man) Pedro Costa creates "a variation on the trilogy devoted to the inhabitants of the now destroyed Fontainhas district of Lisbon, or rather a sort of appendix to the third part, "Forward to Youth! Lisbon, or rather a sort of appendix to the third part, "Forward to Youth", whose hero, Ventura, reappears, here becoming one of the four characters in these dialogues of despair. They continue, from set to set, from the darkest to the brightest, carried by the sumptuousness of the frames and the tones of light and shadow that made Jacques Rancière say Jacques Rancière said about "En avant Jeunesse! The faith in art that attests to the greatness of the poor - the greatness of any man - shines through here more than ever. But But no longer the faith that equates it with the affirmation of salvation. A figure runs through "O Nosso Homem" to express its mythical violence: "that man who takes people a better life", furtively slipping them a paper that he asks them again so loudly, to the expulsion notice that hits José Albert, one of the four Cape Verdeans pursuing the project, at the end of the film. Cape Verdeans continuing in Lisbon these exchanges on the improbable dignity of life. (Raymond Bellour)

"I was a good mason. I never did a wall wrong. My boss never complained about me. One day the work stopped, I lost my unemployment. No pension, no family allowance. I looked for work everywhere, but nothing. I didn't bring any money home, Suzete kicked me out.