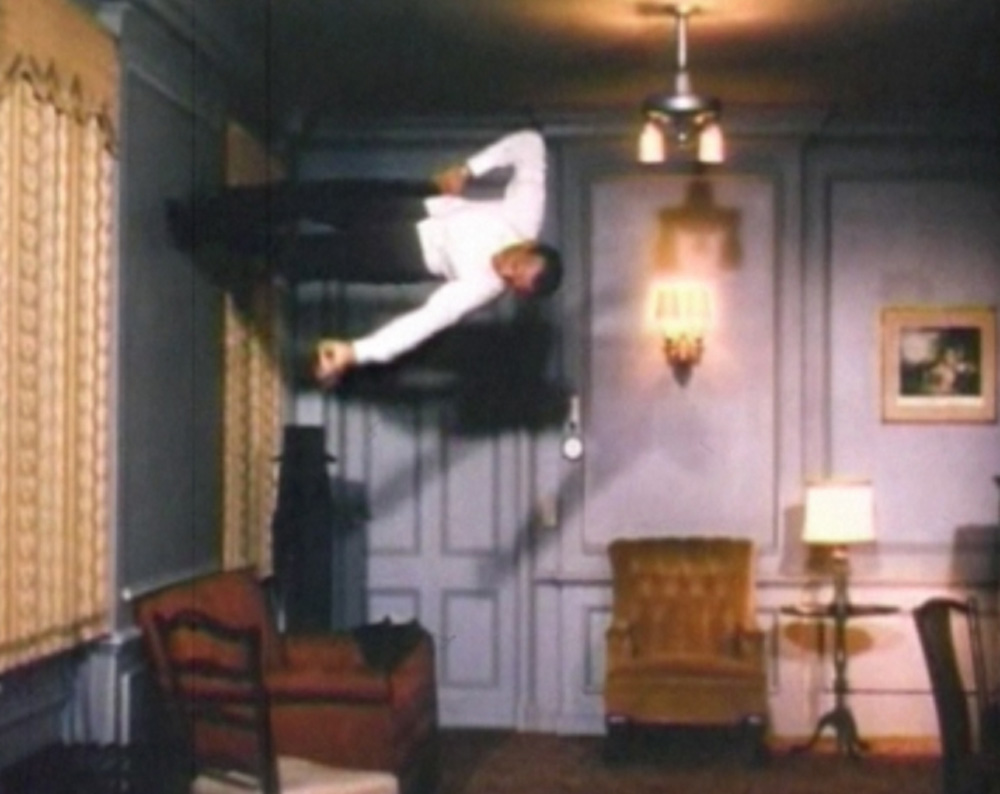 "Alteration" is the theme of this first session. Screening, discussion... A new session with one of the pioneers of conceptual art and multimedia whose incisive work questions the visible and invisible and invisible systems of power in a society dominated by the mass media, hyperconsumption and advanced technologies.

in the presence of Antoni Muntadas and Eugeni Bonet.

Eugeni Bonet : Mecanica (retard digital)) Video, colour, 5', sound, 2001 This video is a selection of images from a famous Fred Astaire film. It is night time when Fred, tired, comes home with a melancholic air. The day is now over. over. After the last cigarette, which is a prelude to imminent rest, he lingers in front of the photo of his beloved. his beloved. It is lightning that rekindles his energy. And what energy. The author has fun exaggerating The author has fun exaggerating it, increasing the speed to the limit of visibility, and this spectacular development spectacular development, pushed to the limit, shows us an overexcited Fred and combines all sorts of to tell us once again about the paradox of Hollywood and the power of love. Eugeni Bonet is an artist, critic and curator working in the fields of the fields of film, video and digital art. His recent films include "Tira tu reloj al agua" (2003-4) and "eGolem" (2007-work in progress). Curator of exhibitions and audiovisual programmes such as "Desmontaje / Demontage" (1993), "El cine Calculated Cinema" (1999-2001), "Próximamente en esta pantalla: El cine letrista, entre la discrepancia y la sublevación" (2005) and "Desbordamiento de Val del Omar" (2010-2011).

Ivan Candeo : El indio y el conquistador (Variaciones sobre Marey) | Video, black and white, 3', sound, 2011 The video El Indio y el Conquistador (Variations on Marey) presents a tap dancer who shakes his body to the rhythm of a his body to the rhythm of a military march. Like the legendary Fred Astaire, the character continues to dance the character continues to dance carelessly, stomping, twisting and moving his arms, evading the the apparent disconnect between the choreographic performance and the martial solemnity of the soundtrack. Iván Candeo was born in Caracas (Venezuela) in 1983. In 2004, he joined the Caracas Contemporary of Contemporary Art of Caracas (TAC), coordinated by Antonio Lazo and Zeinab Bulhossen. In 2008, he was appointed professor, specializing in Plastic Arts at the Universidad Pedagógica Experimental Libertador, Pedagogical Institute of Caracas. He studied photography, performance art and performance art and contemporary art criticism. He had his first solo exhibition in 2009 under the title DRAGSTER Bureau #1, Caracas, Venezuela. His work has been shown in several group exhibitions in Venezuela and abroad. In 2012, he received the Young Artist artist award from the Venezuelan Association of Visual Artists. He is currently working as an art teacher.

Gerard Freixes : The Homogenics | Video, black and white, 3'32'', sound, 2010 Today, everything looks the same because of standardisation. The Homogenics family knows this only too well. all too well. Born in Igualada (Spain) in 1978, Gerard Freixes studied Fine Arts at University of Barcelona. Later, while working as a commercial video editor, he developed he developed his own experimental videos. In his works, he uses digital manipulation of archival images from the public domain to create new narratives in mainstream narratives in mainstream culture.

Angel Nevarez & Valerie Tevere : Touching From a Distance Video, 2 screens, colour, 4'45'', sound, 2008 Touching From A Distance focuses on the fragmentation of public space and the various uninhibited actors that simultaneously occupy the space of the Plaza who simultaneously occupy the space of the Plaza de la Liberación in Guadalajara, Mexico, at a particular time, while delving into their intrinsic interests and concerns. Like the Mariachi of Guadalajara, dressed in traditional garb, performs Joy Division's song Division's song, Transmission, a protest against the inefficient use of regional public funds regional public funds emerges. This work oscillates between the simultaneity of the performance space, the protest and public use, and claims the Plaza del la Liberación as a stage and place for public of public expression and musical interventionle. The interests of Angel Nevarez and Valerie Tevere are to be found in the the formation of itinerant, performative and discursive social spaces, but also in the radio in these spaces. Through various forms of media, their current projects media, their current projects investigate contemporary, dissident music and public forums, and move the spatial simultaneity of performance and enunciation, reflecting on the projects of the projects of political organizations through transmission and song. Tevere and Nevarez have received numerous international grants and residencies and have been commissioned to produce original projects for international biennials and exhibitions, including CASCO, Utrecht, NL; Manifesta 8, Spain; New Museum, NY; Henie Onstad Art Centre, Oslo, Norway; Creative Time, NY. Angel Nevarez is an artist, musician and professor in the Department of Art, Culture and Technology at the Massachusetts Institute of Technology (MIT). Valerie Tevere is an artist and Associate Professor of Media Culture at the City University of New York / College of Staten Island (CUNY/CSI).

Fernando Baños : Mira el árbol | Video, colour, 6'50'', sound, 2009 In November 1941, the Nazis established a ghetto in the Czech city of Terezín as part of what they called "the final solution of the Jewish question". what they called "the final solution of the Jewish question". Until June 1, 1943, prisoners arrived in Terezín after prisoners arrived in Terezín after walking from Bohusovice, where they had been transported by train. On 26 March 2009, I walked the three kilometres from Terezín to Bohusovice and recorded the experience in one take. In this video essay, some of the sequences refer to a photograph taken in secret between 1943 and taken in secret between 1943 and 1945. Thus, certain details are exalted and become a credible a credible element for the construction of another history of history. He graduated in Chemistry from the University of Oviedo in 1994. Fine Arts and a Master's degree at the Complutense University of Madrid (2008 & 2009 respectively). Artist and researcher in the Art History III department of the Complutense University of Madrid. Madrid. He participates in the R&D project "Art images and rewriting of narratives in the global visual global visual culture".

Antoni Muntadas : Alphaville e outros | Video, colour and b&w, 9'18'', sound, 2011 Dream, time, success. Alphaville e outros is a project that explores the relationship between the public and public and private spheres through urban developments, called "condomínios fechados "(enclosed condominiums) in Brazil. Alphaville e outros is constructed as a reality and a metaphor for metaphor for different interpretations and needs of ownership - house, architecture and protection - walls, controls and security systems. The interpretation of public space is at the the origin of this project. Jean-Luc Godard's film Alphaville and the gated community Alphaville as futuristic projects with different intentions. Fiction and economy. This project takes into This project takes into account the texts of Teresa Caldeira, Brazil and Mary Svampa, Buenos Aires. Antoni Muntadas is a major artist of the last 50 years. He was born in Spain in 1942, and has lived in New York since 1971. By considering the media as an instrument of socialisation and normalisation, Antonio Muntadas socialisation and normalisation, Antonio Muntadas' internationally acclaimed videos and installations explore and installations explore the contradictory messages disseminated through the written and televised media media, their organisation and their language. Through his work, Muntadas re-conceptualises the available imagery in order to provoke the viewer to reflect on the meaning of the messages the meaning of the messages, thus creating a breach in the uniform construction of the "media flow", that flow of information managed by advertisers with the aim of their total consumption, unanalysed by the consumption, without any analysis by the public. In his film Political Advertisements (presented in cooperation with Marshall Reese), Muntadas presents us with a country of manipulation, the land of televised politics. His film 'Between The Frames' focused on the world of the world of art and presented interviews revealing the structural intertwining that establishes the the way art is communicated, constructed and traded. His work is permanent collections of the MuHKA, Museum of Contemporary Art Antwerp, Belgium, the Museum of Contemporary Art in Valladolid, Spain, the National Museum of Contemporary Art in Athens. In addition to numerous screenings of his video work, Muntadas' work has been presented at the Museum of Contemporary Art in Barcelona, the Kunsthalle in Vienna, the Witte de With Centre in Rotterdam Rotterdam, the SMAK in Ghent, Belgium, the Ludwig Museum Budapest. He has been a guest professor at Fresnoy. This year he will be present at the Venice Biennale. In his installations, public space projects and videos, Muntadas deconstructs the system of representations and information that prevails in the contemporary media landscape. He investigates the invisible mechanisms that information in the production and reception of mass media content. It analyses the consumption of information and the process by which it is manipulated by power, propaganda and profit..