Moving_image is a cycle of monthly screenings at the Gaîté Lyrique, a space space for discovery and reflection dedicated to contemporary practices of the moving image. practices. Video, film and multimedia works are presented in the form of a primer. 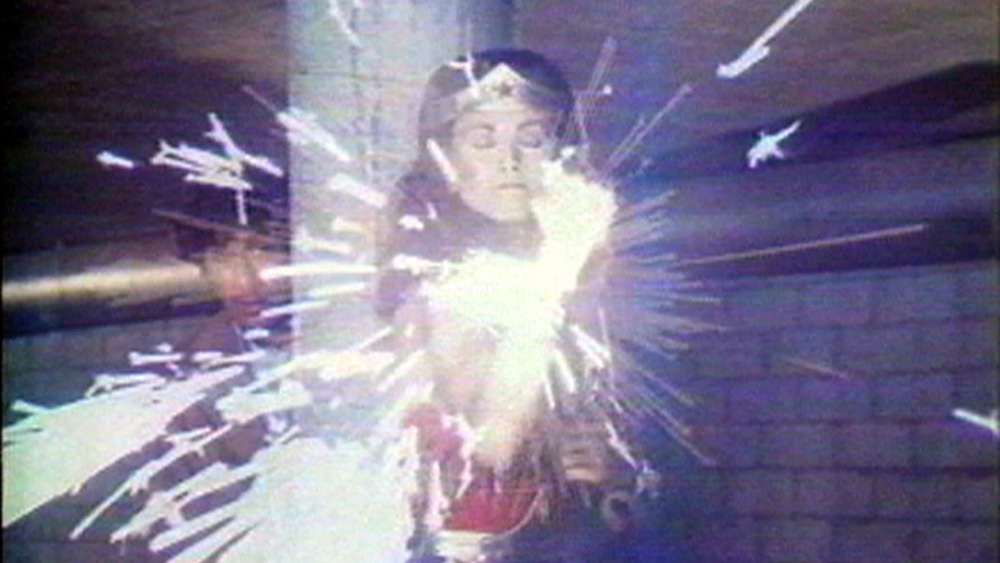 For the 18th letter of its alphabet book, MOVING_IMAGE proposes a session around the notions of of repetition and "reenactment". Characteristic of contemporary practices of the moving image, these notions these notions allow a critical reappropriation of images and discourses, a renewed listening and understanding of our and discourse, a renewed listening and understanding of our time. With the exceptional screening of two major works major works in the history of video art, "Technology/Transformation: Wonder Woman" by Dara Birnbaum, and Birnbaum, and "Hood" by Klaus vom Bruch, the presence of Jean-Jacques Palix for the presentation of his film "This record is the same as the other", as well as videos by Bjørn Melhus, Adel Abidin, Rod Dickinson. The session will end with a provocative and political film "The Eternal Frame" by Ant Farm and T.R. Uthco.

In the presence of Jean-Jacques Palix.

Dara Birnbaum lives and works in New York. A pioneer in video art, she began using video in 1978 in 1978 while teaching at the Nova Scotia College of Art and Design. Her work has Her work has been exhibited at the Metropolitan Museum of Art in New York, the Museo Nacional Reina Sofia in Madrid Madrid, the Museum of Contemporary Art in Los Angeles and the Centre Pompidou in Paris.

Klaus vom Bruch lives and works in Cologne. A pioneering artist in video art, his work is provocative and hypnotic. and hypnotic, is characterised by the repetition of shots, the acceleration of rhythms and the collage of seemingly irreconcilable images. His work has been exhibited at MoMA in New York, the Moderna Museet in Stockholm and at Documenta 8 in Kassel.

Jean-Jacques Palix : Ce disque est le même que l'autre | Video, dv, colour, 9', France, 2009 [no dialogue] Both a sound and cinematographic reflection on the notions of repetition and perception, this video video uses sequences from feature films representing record players or people handling records. handling records. The soundtrack is a natural mix of the original sounds of these rushes.

Jean-Jacques Palix lives and works in Paris. Sound artist and composer, he created the Tapage Atypique studio and the Song Active label. His work has been shown at the Centre Pompidou in Paris, the Reina Sofia National Museum in Madrid and the Haus der Kulturen der Welt in Berlin as part of the as part of the Rencontres Internationales Paris/Berlin/Madrid.

Bjørn Melhus lives and works in Berlin. His work explores the possibility of a critical reception of film and television, by means of fragment, multiplication of characters and disguise. Her work has been shown at the Tate Modern in London, MoMA in New York and at the Centre Pompidou in Paris.

Originally from Iraq, Adel Abidin lives and works in Helsinki. His work explores the complexity of the between culture, politics and identity. Abidin uses his cross-cultural experience to create a distinct to create a distinct visual language, often with sarcasm and paradox. Her work has been exhibited at the Venice Biennale, the Institut du Monde Arabe in Paris and the Mori Art Museum in Tokyo.

Rod Dickinson lives and works in the UK. A visual artist and lecturer at the University of West University of West England in Bristol, his work questions the way in which our behaviours interact with media and social contexts. His work has been shown at the Kunstwerk in Berlin, the Glasgow Contemporary Art Centre, Montreal Centre for Photography.

Ant Farm, T.R. Uthco : The Eternal Frame | Performance document, vhs, colour and b&w, 22'19'', USA, 1975 This film is an irreverent re-enactment of the 1963 assassination of John F. Kennedy as seen in the famous film Zapruder in the famous film Zapruder, a performance show in which the roles of John and Jackie Kennedy are played by the by the performers themselves. Immediately confiscated by the FBI in 1976, "The Eternal Frame" questions the role played by the media in creating postmodern historical myths.

The Ant Farm collective was active from the 1960s to the 1970s in the fields of media, architecture and performance. architecture and entertainment. Their works mix acid pop humour with sharp political criticism. political criticism. The images of a Cadillac smashing through a burning TV wall, or the burial of 10 Cadillacs are emblematic of their provocations against the media and American cultural icons. icons. The T.R. Uthco collective was founded in 1970. Its work engaged in a satirical critique media and cultural models. Between reality and fiction, they parodied iconography, political symbols and cultural myths.