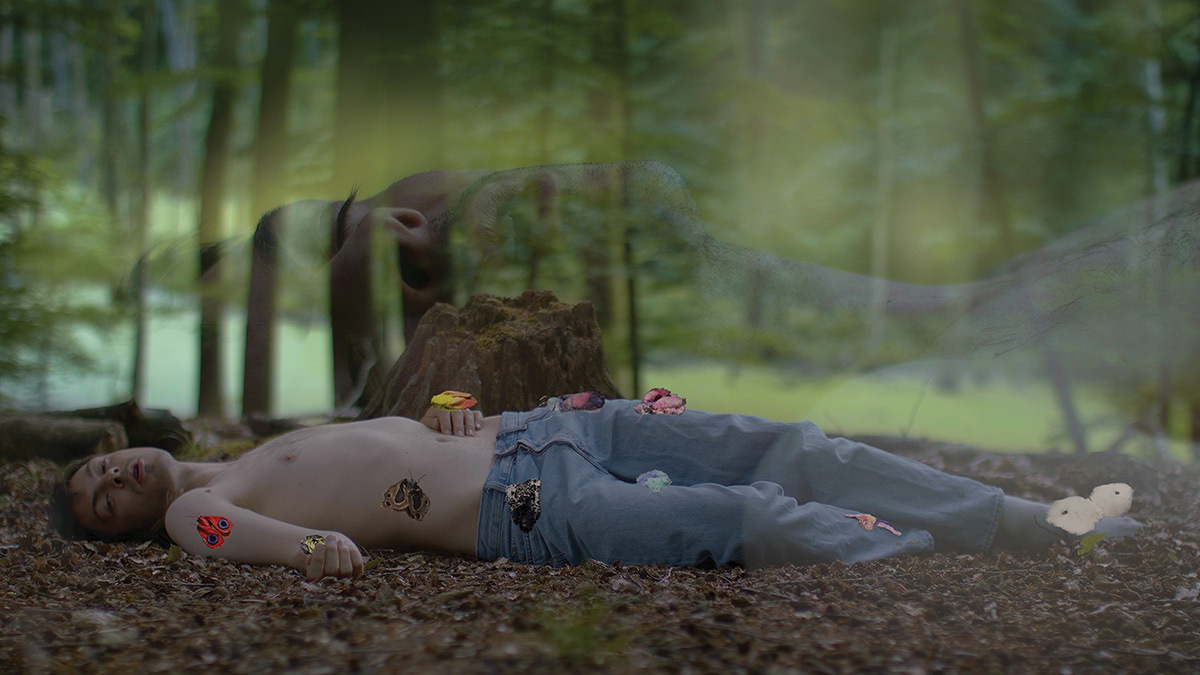 Hour of Moth (Etude no. II)

A human being (the artist himself) lies half-naked on a forest floor, facing the viewer while gently singing. On his body rests a throng of colorful moths whose fluttering wings generate a melody attuned to the song. With its prolonged visual intro and lyrical song, Hour of Moth (Etude no. II) takes the form of a music video where Mejdahl himself is both the singer and songwriter. The work is a love song to the angel of the night—the moth—but also a yearning and sensual hymn to all nature. Mejdahls claims the geometric patterns on moth wings to be hidden warning messages from nature itself, but humans struggle to comprehend them. Hour of Moth (Etude. no II) thus looks upon the current climate crisis in which the human race feel detatched from Nature, while still searching for hope in the dark. This video art piece was made for Mejdal’s solo exhibition Liljegrotten (Lillith Grotto) at Overgaden Institute for Contemporary Art, Copenhagen (2021). The same year Hour of Moth (Etude no. II) was aqcuired by by The Museum of Contemporary Art (Museum for Samtidskunst), and The Danish Arts Foundation.

Copenhagen-based visual artist, filmmaker, and electronic music composer Kim Richard Adler Mejdahl was born in the Danish village Skælskør. With an educational background in fine arts Mejdahl has created a wide range of critically acclaimed artworks that interweave genres and media. In 2018 Mejdahl received The Jury’s Solo Award at Charlottenborg’s Spring Exhibition for his horror-musical documentary ODE - featuring the artist’s entire family that sing about their deceased abusive father. The movie was later aqcuired by The National Gallery of Denmark (Statens Museum for Kunst). Mejdahl’s largest production consists of his debut arthouse feature DAYS OF AL from 2019 - an experimental horror film starring the artist’s cousin and puppy dachshund as leading actors. Both movies come with its own soundtrack released by the artist’s music alias Kim Kim. This summer Mejdahl will release Liljegrotten - a music album and Denmark’s largest collectively produced sound piece made entirely out of audience sound recordings generated at the artist’s latest solo exhibition at Overgaden Institute of Contemporary Art.