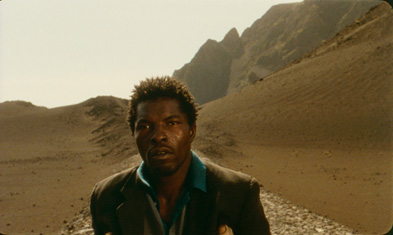 For his second feature film, from 1994, the Portuguese director Pedro Costa constructs a politically savvy homage to Jacques Tourneur?s 1943 horror film, I Walked with a Zombie, in which postcolonial decay is invested with both metaphysical and erotic allure. Leão (Isaach De Bankolé), an immigrant laborer in Lisbon, is knocked unconscious in an industrial accident; Mariana (Inês de Medeiros), a nurse, volunteers for the medical transport that repatriates the comatose man to one of the Cape Verde islands. She busies herself at the rustic hospital that has taken him in, but she quickly comes under the spell of the volcanic island?s loamy mysteries?many of which seem to revolve around the still inanimate man. Psychology takes a back seat to the overtones of history as Mariana finds herself growing increasingly involved with the family that lays claim to Leão as well as with a Portuguese émigrée, Edite (the French cult actress Edith Scob, from Eyes Without a Face), whose madness derives from social traumas of the local past. With a strikingly modern yet humanistic style, Costa elicits quietly declamatory performances from his remarkable cast (which joins nonactors and seasoned professionals) and creates moody, luminous tableaux to conjure an incantatory, Faulknerian earthiness.

Pedro Costa (born 1959) is a Portuguese film director. He is acclaimed for using his ascetic style to depict the marginalised people in desperate living situations. Many of his films are set in a district of Lisbon inhabited by the socially disadvantaged and shot in a natural and low-key way that makes them resemble documentaries. While studying history at University of Lisbon, Costa switched to film courses at School of Theatre and Cinema (Escola Superior de Teatro e Cinema). After working as an assistant director to several directors such as Jorge Silva Melo and João Botelho, he made a first feature film O Sangue (The Blood) in 1989. He collected the France Culture Award (Foreign Cineaste of the Year) at 2002 Cannes International Film Festival for directing the film No Quarto da Vanda (In Vanda?s Room). Juventude em Marcha (Youth on the March, known as ?Colossal Youth? in Anglophone countries, and ?En avant, jeunesse? ? ?Onward, Youth? ? in Francophone countries) was selected for the Cannes Film Festival in 2006 and earned the Independent/Experimental prize (Los Angeles Film Critics Assossiation) in 2008.