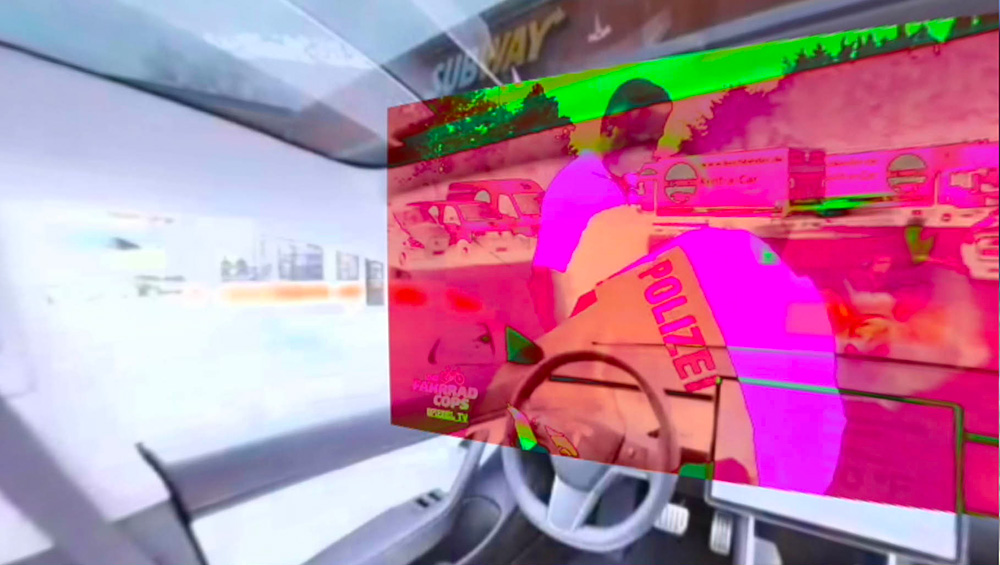 Made of 360 fragments of found footage 360° videos, “- f(OO)f -” explores and recycles sequences recorded from cars, planes, video games, reports and home videos. Images are intertwined, intricated and edited, questionning both spaces of perception and representation, building a radical criticism of our contemporary visual culture.

Dirk Paes was born in Brussels, he lives and works in the Netherlands. He is one of the members of the JODI duo, who pioneered web-based art in the mid-90s. For a few years now, in parallel to their collective work, each of them is developing specific artistic researches on their own. Jodi’s work is featured in most art historical volumes about digital art, media art, and net art, and has been exhibited widely at venues such as documenta X, Kassel; Stedelijk Museum, Amsterdam; ZKM, Center for Art and Media, Karlsruhe; Bonner Kunstverein and Artothek, Bonn; InterCommunication Center, Tokyo; Centre Pompidou, Paris; Center for Contemporary Arts, Glasgow; Guggenheim Museum, New York; MoMA, New York; Eyebeam, New York; and Museum of the Moving Image, New York, among many others. Jodi is regularly seen as part of an international group of artists, including Vuk Cosic, Alexei Shulgin, and Olia Lialina, who pioneered art on the web, usually referred to as net.art. In contrast to working in the institutionalized art world, they chose to work on the net because it gave freedom. The internet was a free space to experiment and communicate. This network of artists influenced each other and communicated using mailing lists such as Rhizome and Nettime (which was founded by Dutch media theorist Geert Lovink). After they met at the Jan van Eyck Academy in Maastricht, where they studied photography and video, they moved to Silicon Valley (San Jose, California) to learn about digital media. It was in Silicon Valley that they became familiar with the internet. Since 1995 they have been working together as Jodi, creating art on the World Wide Web. Although they are most famous for their web-based work, they also work in a wide variety of media and techniques like software, performances, installations, and exhibitions. JODI were among the first artists to investigate and subvert conventions of the Internet, computer programs, and video and computer games. Radically disrupting the very language of these systems, including interfaces, commands, errors and code, JODI stages extreme digital interventions that destabilize the relationship between computer technology and its users. They received a 1999 Webby Award in the category Net Art. In 2014, Jodi was awarded the inaugural Prix Net Art Award by Rhizome, a leading art organization dedicated to born-digital art and culture affiliated with the New Museum in New York. The influence of the work can not only be seen in the art world, but in internet culture too: the work is spoken about on forums of hacker sites and on YouTube many videos can be found reviewing, explaining, and researching wwwwwwwww.jodi.org with titles such as “weirdest website of all time” and “wwwwwwwww.jodi.org: secrets?”.